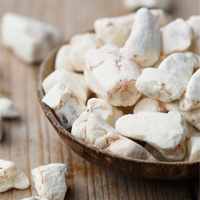 Baobab may be poised to take the crown for the next great superfood. So how come you’ve never heard of it?

You may have heard of the ancient baobab tree from Africa, which is ripe with myth and legend. Mature baobab trees growing in Africa have been carbon dated to over 1000 years old. People once believed an angry god turned the trees upside down after growing tired of the tree’s arrogance, as the often leafless branches resemble roots growing upward. But what you may not have heard about is the fruit of the baobab tree. The baobab tree produces a large greenish pod which contains a white powdery fruit that resembles misshapen hard marshmallows mixed among the seeds and strings. Traditionally, locals would eat the pulp fresh from the pod or add it to hot cereal.

The baobab is starting to gain in popularity and creep into the mainstream marketplace. The baobab pulp dries inside the pod, meaning manufacturers and suppliers have a relatively easy time milling the fruit into a powder. The powder can be added to dough or smoothies. Consumers are starting to see products containing baobab coming onto shelves in Whole Foods, Sam’s Club, and Kroger. Manufacturers are also adding baobab to cereals, nutrition bars, trail mix, and surprisingly gin.

One benefit baobab has that can’t be said for many other fruits is it’s benefit to many African communities. Harvesting of the baobab fruit, which has taken off in recent years, is having a positive effect on often impoverished countries, such as Malawi, Ghana, and South Africa, with reports of women now earning enough to support their family.

Demand of and interest in baobab is on the rise, and rightfully so. With its ancient roots, impressive nutrient profile, slightly sweet taste, and positive benefits to women in rural Africa, it is clear that baobab earns its nickname “tree of life.”